HOW TO BE A TEENAGER

my friends and i were always pretty tame. i spent my teenage years oblivious to the fact that i was missing out. i was much happier staying at home drawing or watching the labyrinth for the umpteenth time with my best friend then going out and living large. wild nights for me usually consisted of silver and purple lipstick and slightly louder music. if my class mates were anything to go by, girls my age spent the entirety of their weekend either drunk or hungover having enormous amounts of sex with what our mothers deemed “inappropriate boys”. when my parents would go away and leave me in charge of the house i would invite a maximum of three friends, eat marshmallows and watch “hanson on tour”. i think the most illegal thing that i ever did was record songs off the radio onto a cassette tape. i was far too caught up in my own little universe to realise that there were other things happening around me and i was not a part of it. of course i loved a good party – especially if it gave me an opportunity to meet boys. but i also loved staying in my room recording demo tapes and writing rap lyrics (i’m trying desperately to find the location of said tapes and dig them out). i remember being desperate to find a boyfriend and fall in love. there’s such a forever quality to being that age. unfortunately, i only had eyes for JTT, taylor hanson, nick carter and devon sawa. my parents practically begged me to rebel. my dad would frequently stuff £20 notes into my hand in the hope that it would get me out of the house. “when i was your age, i was out every friday and saturday night.” this would usually follow with a shrug from me and permission to run up to blockbusters and rent a movie. this was all the excitement i could ever desire. sometimes, i would be permitted to rent two movies – that would be a great day. there were rare occasions when the feeling that i was “doing my teens wrong” would emerse, but they were only ever momentary. i never identified with the teens in programmes such as dawson’s creek or my so called life, who seemed to speak like they were grown-ups and always attended cool house parties. they also never tell you that these so called “teens” are in fact being played by twenty-five-year-old adults who don’t suffer from bad skin or awkward body shapes. if these were the type of girls the boys were after, then there was no use in me bothering. a lot of my reluctance was based on a flat refusal to grow up and take on responsibility. no doubt i was not alone in my peter pan delusions. my biggest worries were getting my hands on the latest edition of point horror and staring lovingly at my giant posters of JTT and taylor hanson. i wished that i could be as beautiful and mysterious as the lisbon sisters, but my life was way too normal. it wasn’t even mundane enough to be borderline sinister. just typical and uneventful. but the reality is that i wouldn’t change a thing. 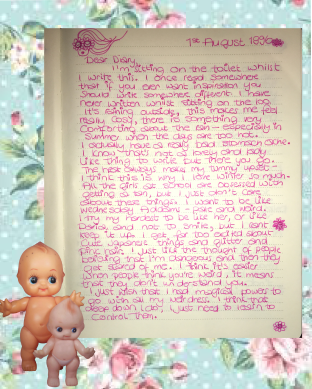 dreamy, whimsical and a little bit weird View all posts by coraviolet